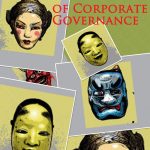 “In theatre traditions of Asia such as the … Japanese Kabuki, the actor is the show. The stories are well known myths and historical epics, so everyone knows the plot. The audience is there to see the performer’s mastery of stylized movements, traditional vocal patterns and their otherworldly appearance in costume and makeup, as they embody legendary roles in a larger-than-life fashion.
– Christopher Agostino[i]

In many ways, this description could be used to describe the relationship between shareholders, directors and management of a corporation. It’s a choreographed dance based on our cultural traditions with iconic characters, some of whom have acquired larger-than-life power and personas. It’s a story of good vs. evil and the side of the good depends on which side you’re on. The machinations of this relationship are cloaked in elaborate language and procedures designed to appear real but that are, in reality, only costume and makeup. What we have in our current state of Corporate Governance is Kabuki Theater.

What do I mean?

These are our foundational beliefs – but they are not reality. We are left with a “convenient truth.”

While ownership has awakened to the challenge, CEO accountability remains largely a myth. And shareholder democracy is the foundational myth that underlies it all. In his majority opinion in the Citizens United case, Justice Anthony Kennedy wrote, “There is… little evidence of abuse that cannot be corrected by shareholders “through the procedures of corporate democracy,”[iii] giving further credence to the fable.

And then there is Corporate Governance. Unfortunately Governance language masks the truth. We use the language of democracy but it’s only theater. Words like elect and vote give the illusion that owners are participating in the running of the companies they invested in. Words like trustee and fiduciary create a false trust in CEO’s and board members. These terms are recited like a mantra or allegiance – especially through the proxy season. Shareholders vote for directors chosen by those already running the company. But, in reality, we don’t have any true access to the ballot. Proposing resolutions is so onerous and expensive that the system disenfranchises all but the richest stockowners.

We are supposed to put our trust in trustees who are so tied up in conflicts of interest as to be virtually incapacitated. The interests of shareholders falls pretty low on the list when trustees are dealing with directors and management because it can ruin business relationships – relationships the trustees need to maintain their own businesses. We trust the trustees because we have to – we have no alternative.

And this is where our work lies. They must come to recognize that fiduciary trust regulations are there to protect the owners of the company and the interest of the owners come first.

[i] “Kumadori —   The Painted Faces of Japanese Kabuki Theatre”